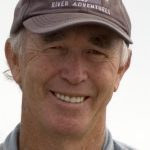 Pip is currently the director of the Grace Gawler Cancer Survivorship and Wellness Institute P/L, where apart from running the websites, his focus is on 55plus wellness, a service to help people age wisely using the latest science and knowhow.

Pip has worked with Grace since 2010. He initiated programs such as Prostate Mates

Pip and Grace Gawler were married in 2016.

Background: Trained in Physical Education at Melbourne University, Pip specialised in Outdoor Education. After leaving teaching in the late 70s, he established the Ulladulla Windsurfing School, built and managed a ski lodge in the NSW Alps. He taught skiing in winter, white-water canoeing and kayaking in spring and windsurfing in summer.

Pip later started an outdoor adventure company called Wilderness Awareness, which helped participants build a deep connection with nature, a forerunner to eco-adventures. It was called Wilderness Adventures of the Heart in Nature.

USA: While living in America, Pip taught Alpine skiing and snowboarding at a northern California resort. He was also a ski mountain guide on a 4000 metre mountain in Northern California. In summer he was a kayak and white water rafting guide.
Mediation and Conflict Resolution: During spring and autumn Pip was a volunteer in Oregon schools where he taught peer mediation and conflict resolution. Later, in the 1990s, after training as a mediator, Pip worked with young men in the juvenile justice systems of Australia and Oregon, USA. He also worked in an Juvenile Correction Centre and was a volunteer mediator in Oregon courts for community disputes.

Australian sports commission: In 2002, while working for the Australian Sports Commission, Pip conducted a week long course with a high ranking Australian Olympic team; some of whom are gold medallists and therefore, household names. The course address issues of sexism, misogyny and harassment and culminated in a ‘clear the air’ conflict resolution and mediation.

Books: Pip has written two booklets, Sustainable Masculinity and Kicking a Goal for Masculinity which are designed as discussion templates to help adults talk about the concept of healthy and unhealthy forms of masculinity with boys, teens and young men. Building respect for women is a central theme. His books and eBooks have been offered free to organisations and individuals.