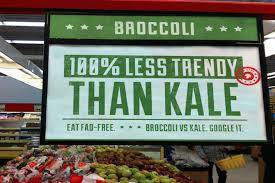 Crazy Kale Adoration: Last year in the USA, 262 babies were Christened with the name – Kale. (Groan)

A few hard facts about kale…

1.KALE IS ONE OF THE HARDEST VEGETABLES TO DIGEST
It does to your insides what a cactus does to your skin when you rub up against it.
Eating it in mass quantities and raw, as we are all doing in salads and juices nowadays, makes the problem even worse. By problem I am referring to that abdominal pooch, what I call ‘Alien Baby’: bloating, stomach, and/or gas.

3. AND A SLUGGISH METABOLIC SYSTEM

Kale can affect your thyroid, the gland at the base of the neck that regulates metabolic process.
The vegetable contains goitrogens, which can cause the gland to enlarge by interfering with thyroid hormone synthesis, generally called hypothyroidism

Cooking is crucial to our diets. It helps us digest food without expending huge amounts of energy.

It softens food, such as cellulose fiber and raw meat, that our small teeth, weak jaws and digestive systems aren’t equipped to handle.

And while we might hear from raw foodists that cooking kills vitamins and minerals in food (while also denaturing enzymes that aid digestion), it turns out raw vegetables are not always healthier.

Many health-conscious eaters opt for low-fat or non-fat dressings on their salads, but according to a study by Purdue University, eating a salad without fat is actually less healthy. That’s because fat is needed by our bodies to absorb the nutrients in vegetables — but not all fats are alike. Researchers discovered one type of fat in particular is the best choice for salad-eaters who are watching their weight.
scientists-say-salad-isnt-as-healthy-without-salad-dressing

Cooking tomatoes — such as in spaghetti sauce – makes the fruit heart-healthier and boosts its cancer-fighting ability. All this, despite a loss of vitamin C during the cooking process, say Cornell food scientists. The reason: cooking substantially raises the levels of beneficial compounds called phytochemicals.

“Live food” faddism resonates with a great many people, because, when stripped of its mystical underpinnings, the concept that eating fresh, unprocessed food makes sense to most people. Also, the naturalistic fallacy, which implies that raw “live food” is somehow more “natural” than processed food, remains very appealing to many people who distrust modern society and science. The only things live about live food is the living woo.

“Live food” faddism resonates with a great many people, because, when stripped of its mystical underpinnings, the concept that eating fresh, unprocessed food makes sense to most people. Also, the naturalistic fallacy, which implies that raw “live food” is somehow more “natural” than processed food, remains very appealing to many people who distrust modern society and science.

As mentioned above, there are hundreds of myths regarding cancer nutrition.

The following myths are thoroughly debunked by Cancer Research UK 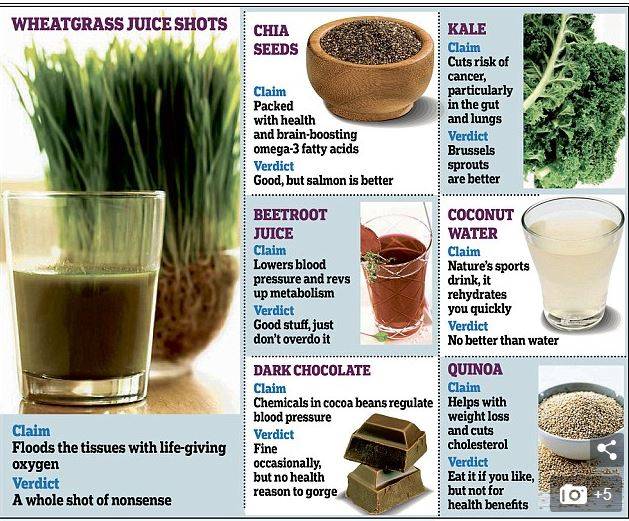 There is no legal or regulatory definition for superfoods.

Sarah Shearman  – Over the past decade, superfoods have become a marketing success story.

Coinciding with the natural foods movement and greater public awareness around healthy eating, 61% of people in the UK have purchased a food because it had been labelled a superfood, according to YouGov research commissioned by Bupa.

There is no legal or regulatory definition for superfoods, and the term is used by marketers and the media to describe foods that claim extra nutritional and health benefits, such as quinoa, chia seeds and kale.

As appetite has grown for these trendy foods, which often come with a high price tag, so has scrutiny over their stated benefits, with some brands like coconut water Vita Coco and pomegranate juice Pom Wonderful dialling down their initial marketing claims.

When coconut water brand Vita Coco launched 10 years ago it was marketed in the US as “nature’s sports drink.”. “There was a lot of aggressive marketing to distinguish it,” explains Arthur Gallego, director of corporate and consumer communications and part of the launch team.

But in 2011, Vita Coco was hit with a class action lawsuit for mislabelling sodium levels and, as part of the settlement, agreed to stop comparing it to sports drinks. Today, the brand is positioned as a “more healthy-for-you lifestyle drink,” promoting its natural and versatile qualities, such as being an alternative to high-sugar soft drinks or for cooking with.

Gallego says Vita Coco started to shift to this brand positioning before the lawsuit, however, coinciding with its launch in the UK at the end of 2009.
Advertisement
“We didn’t see much consumer feedback on that suit and it had no effect on sales,” explains Gallego, who adds that Vita Coco has over 80% market share in the UK and expects to reach £100m in sales in the country by the end of the year.

Note from Pip and Grace: The marketing of coconut products has been highly successful. Our local coffee shops now use coconut impregnated sugar. Our local health food shop sells hundreds of coconut products – from cooking oil, skin products, coconut ice cream, coconut yoghurt. The situation was so extreme that a GP colleague remarked upon visiting the health food store – “I swear every product in here is coconut impregnated or related!”The same-store has a huge machine outside on the street selling alkaline water – another fad which has been thoroughly and scientifically debunked. 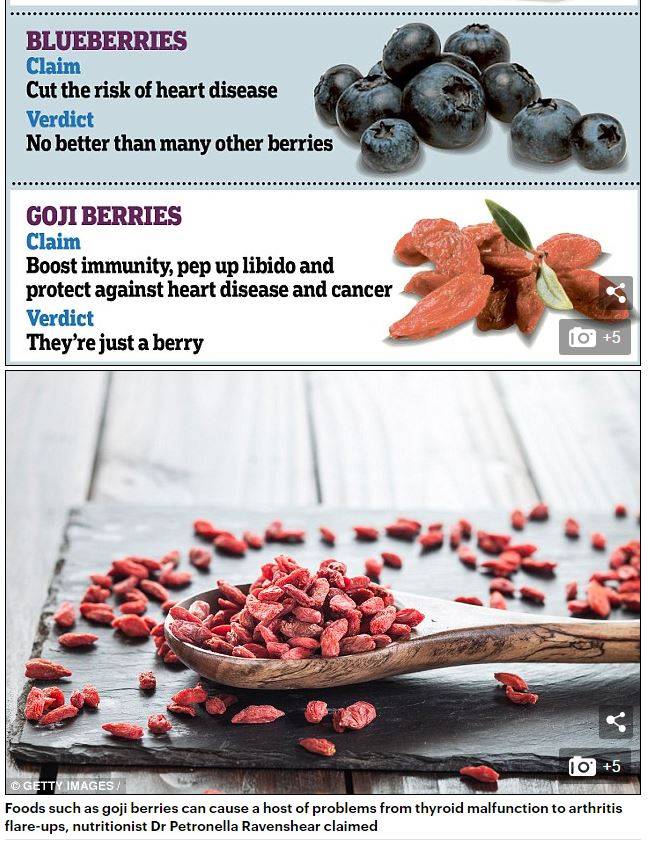 Pom Wonderful, the pomegranate juice brand, is another product that shot to superfood fame, but has been forced to rethink its marketing claims. A US court ruled it did not have sufficient evidence to support its claims that its juice reduced the risks of heart disease, prostate cancer and impotence. In the UK, the Advertising Standards Authority (ASA) banned an ad from Pom Wonderful in 2009, depicting the product’s bottle with a noose around its neck, and the phrase “cheat death” because it exaggerated health claims about the antioxidants in the drink.

In the UK, regulation around superfoods is the same as with any foods – claims on food labelling, presentation and advertising must be clear, concise and based on credible scientific evidence, adhering to the EU Register of Health and Nutrition Claims.
The ASA recently banned a TV ad promoting Bioglan’s chia and flax seeds, over the use of the word superfood, because it referenced general benefits of the food for overall health and, as such, needed to be accompanied by a specific authorised health claim.
A matter of personal taste

Martin Kemp, managing director of UK-based “power food” brand Naturya – whose products include wheatgrass powder and cacao nibs – says that while there are tight restrictions on the claims these products can make, the target demographic generally are drawn to the foods themselves through recommendations and their own research. “I am happy to not make claims and let people make their own minds up about it, ” he says.

Kemp says that these foods “pack more of a nutritional punch,” and the focus of any marketing is on the quality of the products themselves, which are organic. He agrees that they are “no panacea” and should be eaten as part of a healthy and varied diet, but it comes down to individual choice. “I don’t see it is as a fad, but more of a zeitgeist movement of people taking responsibility for their own health,” he says.

“There’s certainly a lot of hype around many trends, but consumers are astute at separating overblown claims from reality,” says Ryan Therriault, vice president of marketing at the Amazonian açaí berry brand Sambazon, which is soon to launch in the UK. As well as focusing on the nutritional aspects of the fruit, Sambazon’s marketing promotes the flavour and the company’s conservation efforts and support for local farmers.
Therriault adds the company is “very aware” of greenwashing and lack of consumer understanding about claims like natural or organic, which is why it undergoes rigorous certification, including USDA Organic and Ecocert Fair Trade.

As well as consumers taking more of an interest in healthy eating, the rise in superfoods is also spurred on by a desire to try new flavours, which superfoods can offer, explains Stephanie Pauk, global food science analyst at Mintel.

She says there has been a shift in the superfoods market in recent years, expanding from more exotic foods like açaí and goji berries, to more “humble” products like kale and sprouted lentils. And the superfood ingredients are also being added across categories, such as beauty products, like nail varnish.

But as superfoods have gained more popularity, they have also drawn criticism. Jeffrey Blumberg, professor of nutrition at Tufts University, Boston, says that the marketing of superfoods can cause consumer confusion, because the word superfood implies it is better than other foods.
“Superfood can mean anything you want it to,” he says. “Every food is unique and goji berries and chia seeds are fine – but they are just another food choice.”
“You don’t see apples, oranges and bananas being advertised as superfoods although they are as nutrient dense,” he adds.

According to the International Food Information Council (IFIC) foundation, consumers are taking more steps to improve their diets. Nearly nine in 10 Americans (86%) are interested in learning more about foods that have health benefits beyond basic nutrition, known as functional foods.
“People want to take control of their health, but there clearly is confusion – and the need for additional education – about which foods have the science behind the benefits [claims],” says Sarah Romotsky, registered dietician and associate director, health and wellness, at IFIC.
“It is important to explain to consumers that food is a tool. Some foods can promote health and reduce your chances of certain diseases, but as part of an overall balanced diet – no one food is going to be the magic bullet,” she says.

Sarah Shearman is a freelance journalist writing about the intersection of technology, innovation and culture.
https://www.theguardian.com/media-network/media-network-blog/2014/oct/02/quinoa-chia-seeds-kale-superfoods-marketing

How marketing obscures science when it comes to what we eat