For some time, we have been prescribing two Japanese manufactured lactic acid fermentation supplements; LACTIS & CHITSU; both functional food supplements that are nutraceuticals. We have also taken the products ourselves – results have been very impressive for our both patients and us.

Rather than relying on anecdotal evidence, Grace is very particular as to the source and purity of products she prescribes for her patients. She needed to further investigate the manufacturing process, the science and therefore evidence-base of LACTIS & CHITSU.

This was important with regards to impact on the gut microbiomes; especially the impact on certain cancer types. The importer and supplier for Taiwan had accrued valuable and valid scientific information from the Japanese that had been difficult to source from Australia.

Further meetings in Singapore & Taiwan with hospitals, oncologists and radiation oncologist’s merged with exciting discussions with researchers of complementary medicine. The success of our trip was beyond our wildest expectations.These new collaborations will undoubtedly prove highly beneficial to many of our patients by increasing the range of both new medical treatments & complementary options not offered in Australia & NZ.

OUR GENEROUS SPONSOR: RC, a Taiwanese businessman who has invested in healthcare, meshed with Grace’s long-term study in safe functional foods for cancer patients. His investigations into science-based complementary medicines meant he had often crossed investigative paths with Grace in Germany, Japan & Switzerland!

For example, both had made exploratory visits to the Strath Tonic & Bio Force facilities in Switzerland. Thus, Grace and RC both only promote products they have personally researched from the ground up through to the delivery to the patient. During our 4 days together, we had many ‘constructive’ conversations about the science behind the products that will help our patients. 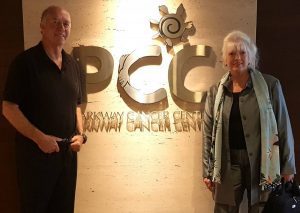 SINGAPORE RADIATION ONCOLOGY STORY: During an invigorating chilli crab dinner conversation with Dr T, a respected and innovative Singaporean radiation oncologist, I mentioned when living in the UK after her world-first surgery in Rotterdam; Grace had been offered consulting rooms in a prestigious London Harley Street Cancer Clinic.

When Dr T asked with whom; Grace replied, ‘Prof Karol Sikora.’  Dr T laughed so hard he nearly fell off his chair. He had studied Prof Sikora’s work for decades and was inspired by his innovative approach to cancer treatment. When he asked how Grace came to know him, she replied he had heard her presentation at the Penny Brohn Memorial (large UK cancer charity) lecture in London.

Impressed by her knowledge and experience, Prof Sikora became a colleague & collaborator and wrote an accolade for the second edition of Grace’s best seller – Women of Silence – The Emotional Healing of Breast Cancer. He even asked Grace if she could work for him at Harley St in London. As Grace and Dr Daniel T talked on, he frequently expressed appreciation for the depth of her cancer experience and her pioneering work of her supportive care model.

TAIWAN STORY 1: A visit and personalised tour of the one of 2 of the World’s Most Advanced Brain Cancer Treatment facility: (the other is in Japan) Similarly, during a meeting with the head Radiation Oncologist at a Taiwan University Nuclear Reactor Brain, head and neck cancer treatment centre, he expressed delight at Grace’s knowledge of his specialised field of nuclear medicine. This is a treatment little known in Australian & NZ medical systems.

TAIWAN STORY 2: At the same university we shared coffee with a young student of interventional radiology. We asked him if he knew of Prof Thomas Vogl from Germany, a colleague and world leader of interventional radiology. Grace explained we often refer patients to him and had filmed many of his remarkable procedures. The student excitedly said he had read all Prof Vogl’s books and hoped to meet ‘his radiology hero’ someday. Grace said she would be happy to write a personal introduction.

TAIWAN STORY 3: Complementary Medicine: Prof K, from Taiwan University; Department of Biological Science & technology, shared a PowerPoint presentation he had recently presented at a medical conference in Japan. The PPT outlined the thorough & elaborate methodology from 18 years of study by his medical and scientific team to verify efficacy of a species of medicinal mushroom. He presented irrefutable evidence of efficacy, verifying Grace’s decades of interest in the mushroom species. The Prof was delighted that Grace understood his complex presentation & that she had in-depth knowledge of the mushroom species and its clinical application for cancer patients.

TAIWAN STORY 4: Medicinal Mushroom Growers/Manufacturers: Interestingly, when we met the team whose farm produced the medicinal mushroom, we noted their Rotarian badges. They were happily surprised to learn Grace was an inaugural recipient of the Rotary International Jean Harris Award of Excellence for services to health in Australia in the late 90’s. (one of few such awards given in Australia) Another remarkable ‘coincidence.’ Or was it?

The vignettes above highlight the extent of Grace’s international cancer medical alliance. That Grace works closely with so many cancer experts, (innovative leaders in their fields), is the highest testimonial possible.

Simply put; her work is unique. There is not another cancer navigator globally with such extensive medical collaborations that provide.

That’s why most new patients say – “I wish I found you sooner.”