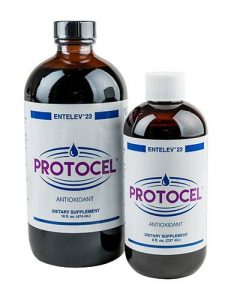 Cancell, also called Protocel, Sheridan’s Formula, Jim’s Juice, Crocinic Acid, JS–114, JS–101, 126–F, and Entelev, is a formula that has been promoted as a treatment for a wide range of diseases, including cancer. Cancell is available in tablet and liquid form.

The Cancell formula was tested by the National Cancer Institute and found to be ineffective against cancer,[1] though Cancell continues to be marketed as a dietary supplement in the US. – Source – https://en.wikipedia.org/wiki/Cancell

In the early 1990s, the National Cancer Institute (NCI) tested these ingredients against cancer cells in the laboratory and based on the results decided not to continue studying Cancell (see Question 5).
No clinical trials have been published in peer-reviewed journals. Only testimonials and anecdotal reports have been made available.

None of the common chemicals in these products is known to be effective in treating any type of cancer.

The U.S. Food and Drug Administration has not approved Cancell to treat cancer or any disease in the United States. In 1989, the FDA requested and received a court order making it illegal for manufacturers to send Cancell across state lines.

Since 1989, it has been illegal in the United States to make, sell, or give Cancell as a treatment for any disease. Mixtures similar to Cancell, such as Cantron and Protocel, are available as dietary supplements.
Source – https://www.cancer.gov/about-cancer/treatment/cam/patient/cancell-pdq